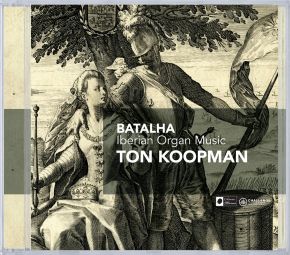 Spanish and Portuguese organs are celebrated for their excellent trumpets (en chamade), but their splendid flutes, prestants, cornets and reeds are less widely known. Their characteristic tone-colors, so different from that of the North German organ, is as inspirational as it is necessary for performing the Iberian repertoire. This is particularly true with regard to the batalha genre. From the second half of the 17th century, organists in Spain and Portugal delighted in recreating the sounds of the battlefield on their instruments. These many battles, improvised or played from manuscript, were effectfilled, loud and clearly articulated. Many of these pieces have survived, though, unfortunately, they are often anonymous. The directness of the trumpet-en-chamade is such a pleasure. These trumpets (boldly horizontal protruding from the organ front) are so loud that any rustling in the church immediately falls silent. The batalha has a simple harmonic structure; its interest lies principally in the stirring rhythm. The musical battle genre of composition, incidentally, was practiced throughout Europe. This CD presents three batalhas: one anonymous, one by Pedro de Araujo, and one by Antonio Correa Braga. The other pieces form a selection of works by representative Iberian 16th century composers.

The organ in the Church of Saint-Lambert in Woluwé-Saint-Lambert (a suburb of Brussels) was built in the Spanish style by Patrick Collon in 1985. Its design was largely inspired by Spanish instruments of the XVIIth and XVIIIth centuries. In the course of the XVIth century Spanish organbuilding underwent a radical change due to the influence of Flemish organbuilders and musicians. Conversely, in the XVIIth century, Flemish organmusic was considerably influenced by contact with Spain. The organ in Saint-Lambert is not a strict copy, but an instrument built in the Spanish style, with Flemish influences, and speaking with a slight Brussels accent.