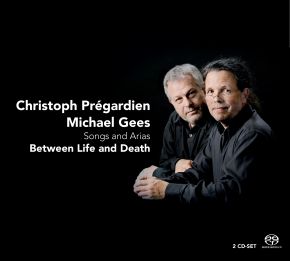 The protagonist of the new album by Christoph Prégardien and Michael Gees has not yet arrived on the scene at the start and is awaited with the greatest yearning. “Come sweet death! Come  blessed rest! Come, lead me in peace, for I am weary of the world, ah come!” Thus the opening of the aria from Bach’s Schemelli Liederbuch, which starts the programme “Between Life and Death”. Death not as the end but as the beginning of a better life – perhaps this message, filled with baroque certainty of salvation and unshakeable quietude, sounds as remote for us today as the afterlife itself. Christoph Prégardien frankly admits to admiring the people of Bach’s time somewhat for their trusting relationship to death: “Today death has been pushed out of our life almost completely, outlawed to the hospital ward and old people’s home. And this is the very reason we have compiled our programme: so that people become a little more aware that death is always in our midst. That we can’t ignore it, but have to accept it.”