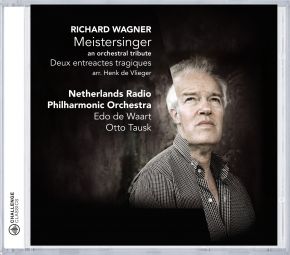 This is an orchestral tribute to Wagner's Meistersinger ánd Deux entreactes tragiques, all of these works in arrangements by Henk de Vlieger.

Die Meistersinger von Nürnberg holds a special position among Richard Wagner’s music dramas. First, it is his only “comic” opera, and its subject, moreover, is not based on a myth or saga. The characters are mere common mortals and at least one of them, Hans Sachs, actually existed. The plot is set within a historical context, 16th-century Nuremberg, and has clear sociological and political implications, regarding the relationship between the artist, tradition and society. The libretto, which Wagner wrote himself, as always, is in keeping with this. In contrast with his mythological and  mythological historical dramas, here the verse lines are longer than in previous works, corresponding more with spoken language, and employ more traditional rhyme patterns. In many places, one could even speak of rounded-off song texts consisting of various couplets.Die Meistersinger also differs musically from Wagner’s other operas. In the preceding works, among which most of Der Ring des Nibelungen and Tristan und Isolde, he developed a musical idiom increasingly marked by short phrases and ever more daring chromaticism. This reached a high point in the love drama Tristan und Isolde, in which tonality itself is stretched to the limit. In Die Meistersinger, however, Wagner returned to a predominately diatonic idiom and its most important moments, such as Walther’s prize song, in fact the central moment, are set simply in the key of C major. Another musical element found throughout this score is brilliant counterpoint, the harmonious combination of two or more melodic lines. Despite all of this, the orchestration of Die Meistersinger is relatively small compared to his other operas. The vivid Romantic tone colours of his orchestral palette, such as the English horn and bass clarinet, are entirely lacking. But the opera is nevertheless filled with instrumental strokes of genius and the orchestration is dazzling in all its riches. Through the cunning combination of all of these elements, Die Meistersinger von Nürnberg is a wondrous, highly original score that is moreover one of the most readily accessible of Wagner’s entire oeuvre.