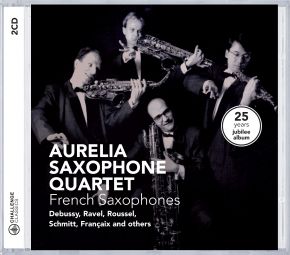 In the beginning of the 1990s we made two CDs dedicated to French music with the Aurelia Saxophone Quartet. Our ensemble, then 10 years young, had already made a name for itself with a number of daring arrangements. The string quartets by Maurice Ravel and Claude Debussy drew the most attention. After all, this was “sacred” music. While developing our interpretation, we wanted to make certain of our ground so we consulted with such renowned string players as Stefan Metz (then the Orlando String Quartet’s cellist) and Raphael Hillyer (former viola player of the Juilliard
String Quartet).

We decided to present the Ravel and Debussy quartets together with the string quartet by these composers’ contemporary Albert Roussel on the CD. The quartets by Debussy and Ravel are often mentioned in the same breath, despite their many differences, and they do bear similarities in their approach to the instruments, harmonic and rhythmic ideas, and musical atmosphere. In addition, the two composers both wrote their only string quartet relatively early in their careers. A year later, we recorded French music that was composed specifically for saxophone quartet. The pieces by Florent Schmitt, Jean Françaix, Gabriel Pierné, Eugène Bozza, Alfred Desenclos and Jean Rivier were all written around the middle of the twentieth century and form the basis of the saxophone quartet repertoire. These pieces were each composed at the request of the famous French saxophone pioneer Marcel Mule (1901-2001). In 1928, Mule and three colleagues from the Garde Républicaine de Paris formed the Quatuor de Saxophones de la Garde Républicaine. This quartet, with its brilliant and expressive playing was perfectly suited for the performance   of virtuoso French music. The great French saxophonist   Jean-Marie Londeix (one of Mule’s most gifted students) wrote us when the recording was released: “The work that you have invested in the playing of Debussy and Ravel pays off with the results of this CD.” For us, that was the confirmation of our efforts to draw a link between the work of the French “saxophone composers” and their illustrious impressionistic predecessors.
Arno Bornkamp (2008)