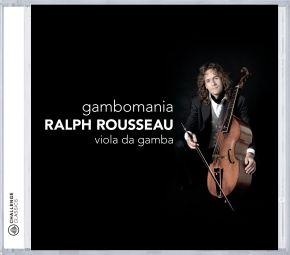 This “Tour de Gamba” provides a representative survey of the evolution of music for the bass viol from its’ beginnings until its’ extinction at the times when the Viennese classic style emerged. With Great Britain, France and Germany all represented, it touches the main geographical centers of viola da gamba-playing. The program is framed and punctuated by works by two main figures of viol-playing: Captain Tobias Hume (c. 1569-1645), whose First Part of Ayres (London 1605) is the very first volume of music written expressly and exclusively for the bass viol ever published in print; and Marin Marais (1656-1728), gamba-player at the court of Louis XIV., who earned the title of a «Chopin of the bass viol» by the breadth and audaciousness of his voluminous œuvre for this instrument. Inserted in this framework are pieces by the enigmatic Johannes Schenck (1660-after 1717), pupil of Marais’ and active in Amsterdam and Düsseldorf, by the equally enigmatic pupil of Marais’ Louis de Caix d’Hervelois (c.1680-c.1760) who might have belonged to the famous and extended family of gamba-players of the same name as well as works by Karl Friedrich Abel (1723-1787), the so called «last gambist».