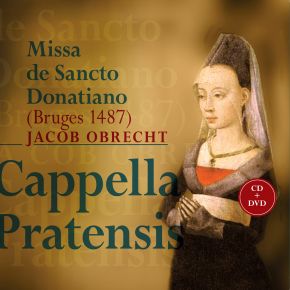 An evocation of a commemorative mass composed by Jacob Obrecht and commisioned by Adriane de Vos - in memory of her late husband, the fur merchant Donaes de Moor - and first sung in the Sint Jacobskerk in Bruges in October 1487, opening a window onto the world of late-medieval Bruges.

Jacob Obrecht(1457/8-1505) was a South Netherlandish composer known mainly for his substantial output of Mass Ordinary settings in the late 15th century, as well as for his motets and songs. Like his close contemporary Josquin des Prez, Obrecht was born and trained in the North, and led a peripatetic career involving positions and patrons both north and south of the Alps. Even as a young man in his twenties his talent and influence were celebrated: in the early 1480s the leading music theorist of the time, Johannes Tinctoris, ranked Obrecht among the masters “whose compositions, distributed throughout the whole world, fill God’s churches, the palaces of kings, and the houses of private individuals, with the utmost sweetness.”

The dvd contains a filmed reenactment of the mass plus an extensive documentary featuring Prof. Jennifer Bloxam (Professor of Music Williams College, Massachusetts USA) and Stratton Bull (Artistic leader Cappella Pratensis) made on-location in Bruges. For more information: go to the very special website of the Saint Donation Mass. This website features an audiovisual recreation of that liturgical service complete with plainsong and Obrecht's polyphony sung by the Cappella Pratensis and linked to an annotated copy of the score.  Essays and images illuminate the rich social, cultural, and theological context of this unusually well-documented occasion.