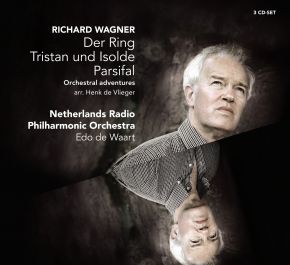 On March 12, 1988, Edo de Waart and the Netherlands Radio Philharmonic Orchestra gave a concert performance of Das Rheingold, the first part of Wagner’s Der Ring des Nibelungen tetralogy. On July 1, 1989, the fourth part, Götterdämmerung, followed, and on February 23 and March 1, 1991, the middle parts, Die Walküre and Siegfried, followed. The performances were so successful that De Waart wanted to add symphonic selections from the Ring to the repertoire for a concert tour of Germany in February 1992. When it appeared that there was no arrangement available, Henk de Vlieger (b. 1953), a composer, arranger and percussionist with the Radio Philharmonic Orchestra, decided to compile an entirely new orchestral suite, which was premiered as Eine Ring-Symphonie, and later renamed Der Ring – an orchestral adventure. Two years later, again after a concert performance, Parsifal – an orchestral quest followed. Its success prompted a plan to issue a three-CD set. Especially for this project, De Vlieger completed Tristan und Isolde in April 1995 – an orchestral passion.

Hi,
I like to buy the 3 cd set of Wagners orchestral music by Radio Filharmonic Orch.Edo de waart (Arr.Henk de Vlieger)
What are the costs?
The price is not on your website.
Is it still to be delivered or is it deleted?

Thanks in advance and best regards
Gert v d Leeden