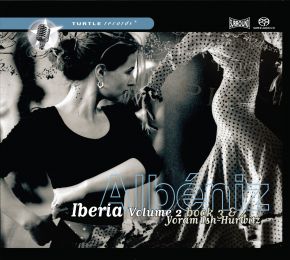 Iberia: Twelve musical impressions of Spain
Over a hundred years ago, the seriously ill Spanish composer Isaac Albéniz (1860-1909) worked frantically on the most beautiful of his works, the piano cycle Iberia. Because of the flamenco elements and the titles of the pieces, Andalusia is often called the source of inspiration for the cycle. The emerging Impressionism of Paris, too, seems to have left its mark on the style, not to mention the Lisztian virtuosity. But the real quality of Iberia lies in the originality with which Albéniz was able to blend these elements and the remarkable power of imagination he demonstrated in the process. These are what set it among the most beautiful pieces of music Spain has ever produced. It gives a romantic impression of the country, which the composer nostalgically longed for but which had not given him the recognition he deserved. Albéniz died in 1909, shortly after completing his masterpiece.

This recording of pianist Yoram Ish-Hurwitz is the third and fourth book of Iberia and makes this short two volume-cycle complete.