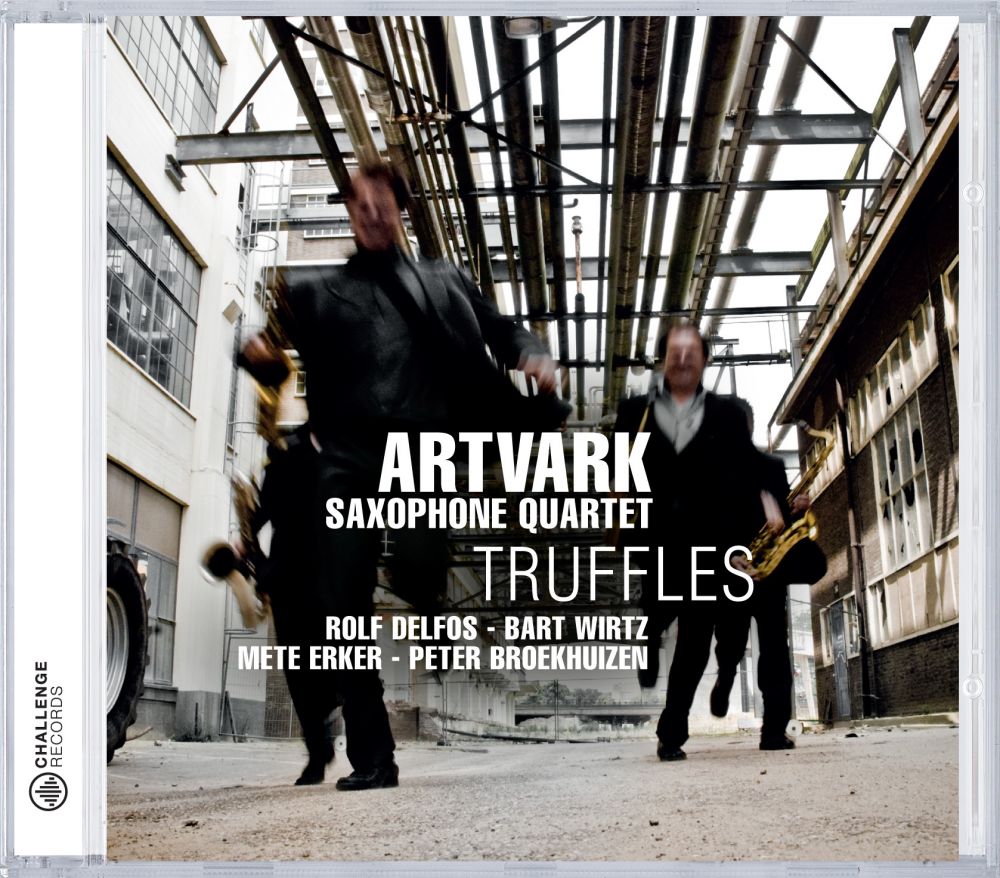 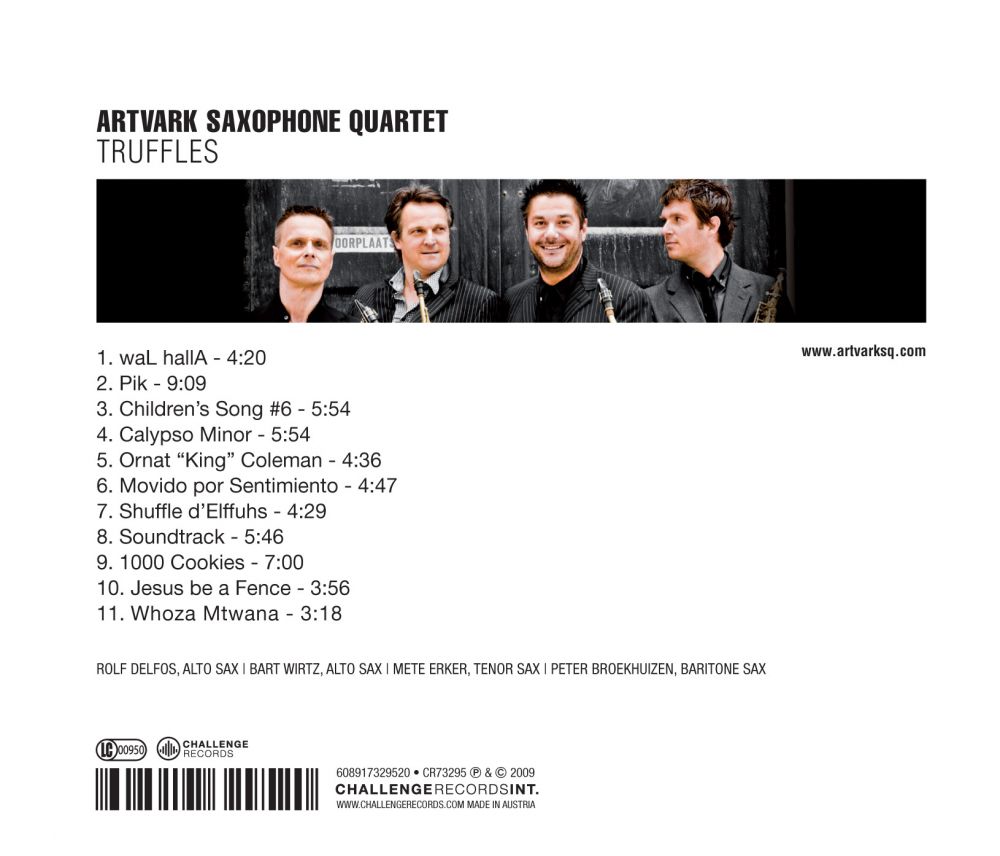 Is not profound beauty most striking when this beauty has arisen from sincere and genuine emotions? When what is conceived in the minds of earthlings is being perceived as higher art by its audience? Do we want to ignore the rancidity of the artist or is his compulsive quest through fire and brimstone a profoundness in its own right? A heavenly result through earthly perseverance. Rooting through mud for that one exquisite truffle.

What is the power of Artvark? All four members combine their love for jazz with tremendous feel for groove & soul and all four have performed at the highest level: check the individual bios. ASQ plays original compositions and arrangements written by the members, which demonstrate the versatility and originality of Delfos, Wirtz, Erker and Broekhuizen. The quartet plays with great agility and move around the stage: all music is played by heart and some of it is quite complex, we can tell you! This gives an extra dimension to the music, since they can concentrate on the moment, the audience and on each other, which opens up new possibilities everytime they play.

A heavenly result through earthly perseverance. Rooting through mud for that one exquisite truffle. Artvark is a phantastic and passionate saxophone quartet and this is their second cd and debut on Challenge Records!

After two years of preparation and hard solid work behind the scene, ARTVARK SQ shows itself in 2004 to the world at the Jazzfestival in Amersfoort (NL). Innovating own compositions, jazz-soloists with distinctive own styles and the adventurous groove of four saxophones. Rolf Delfos (alto/soprano), Bart Wirtz (alto), Mete Erker (tenor) and Peter Broekhuizen (baritone) produce with their different backgrounds an unanimous, creative and original sound: THE SOUND OF ARTVARK. After a flying start at Dutch Jazzfestivals and the overwhelming reactions to those concerts, the first CD, 'Artvark the Jazz Saxophone Quartet', was released in ‘05. The CD was very well received by the press, including a four star rating CD-review in the authoritative Dutch newspaper ‘De Volkskrant’.

Since then the quartet performed in the Netherlands, Belgium and France, both on bigger stages as in the intimacy of chamber music settings. Unique was the double bill with ZAPP STRING QUARTET, with special arrangements for the combination of the two quartets. A highlight in March ’09 was the collaboration of ARTVARK with Mr. PETER ERSKINE (USA, Steps Ahead/Weather Report) and Mr. DOUDOU n’DIAYE ROSE (Senegal, Miles Davis/Rolling Stones). Special music was written for this beautiful project by Martin Fondse (check YouTube).

Recently Artvark toured with the project ‘busy, busy, busy’, a joined venture with NEW NIKS, the quartet of dummer Arend Niks. Premiere of ‘bbb’ was in the famous jazz club the Bimhuis in Amsterdam, live recorded by VPRO radio. In October ‘09 the CD of ‘bbb’ was released in De Doelen in Rotterdam (NL). In November ’09 ASQ appeared with this project on Dutch television in ‘Vrije geluiden’, a very fine live music program for both classical and jazz performers.

TRUFFLES is recorded in the beautiful Fattoria Musica studio in Osnabrück, Germany, the sound is fantastic. Special guest will be the notorious Mr. Kees van Kooten, Dutch writer and poet, who will be performing with ASQ. Why the title ‘Truffles’? ARTVARK is always rooting through the mud looking for that one exquisite truffle.

Rolf Delfos has been very active during the last 20 years in the international jazz scene. Plays since the 80-ies in THE HOUDINI'S, the jazzsextet with which he has recorded 12 cd’s and got great response and recognition (the Houdini’s received in 1996 de “Gouden Notenkraker”, a award for their complete works and beautiful efforts in the Dutch jazz scene). The Houdini's toured extensively in Australia and recorded in New York in the famous Rudy van Gelder studio, with the man himself behind the desk! Delfos is also a composer, active in several groups like the Pascal Vermeer Sextet, the trio The Quiet American, the LEWINSKY QUARTET, HE JAZZINVADERS and the soul-jazz formation THE AURATONES. He performs with the Cubop City Big Band (NL), the Paulo Gomes Group (Portugal), GINO VANNELLI and played with e.g. Denise Janah, Lois lane, DJ Phil Martin and Trijntje Oosterhuis, with whom he recorded the Blue Note album ”Strange Fruit”, for which Delfos wrote a big part of the charts. Delfos recorded during his career over 50 cd’s cd’s and is often to be heard on radio and television.

Bart Wirtz graduated in 2002 cum laude at the Rotterdams Conservatorium, Holland and pursued his study in New York, where his teachers were Gary Bartz, Dick Oatts and Steve Wilson, amongst others. Wirtz was the winner of the Erasmus Jazzprize (NL), the Leidse Jazzprijs (NL) and the Breda Jazzprize (NL). He is one of the most recognized upcoming angry young jazz-soloists of the new generation. He plays in different bands like MONSIEUR DUBOIS, a danceable hardjazz formation which performed at the North Sea Jazz Festival, in THE YOUNG SINATRAS, “a small big band bringing the new Sinatra vibe” (also at the North Sea Jazz Festival), his own jazz quintet with his original music and the ROTTERDAM JAZZ ORCHESTRA. Besides this he is a free-lancer with e.g. the Holland Big Band, Swingmatism Extended, New Cool Collective Big Band, French Connection, Cubop City Big Band, etc. In ’09 Bart released the first cd of his own BART WIRTZ QUARTET, with whom he played at the famous North Sea Jazz Festival.

Mete Erke graduated in 1998 at the Royal Conservatory in The Hague. In 1997 he was selected – as one of the only two Dutch students – to participate in the International Association of Schools of Jazz in Sienna, Italië, where he met David Liebman. David invited him as a special guest with his band, the DAVID LIEBMAN GROUP, to play at the North Sea Jazz Festival in 1997. In 1999 he started his own band BLINK, with which he won the first prize at the Jazzfestival Breda (NL) and in 2000 the Dordtse Jazzprijs (NL). After that Mete was selected for Young VIP Tour 2000. (BLINK: I Eye My Self, A-records, 2000). He toured with Eric van der Westen’s QUADRANT through South-Africa and recorded the cd’s Naala (1999), Rush Hour (2001) and with the quintet of the South-African trumpet player Feya Faku: Hommage (Arecords 1999). He played with French Kiss, the Stefan Lievestro/Jesse van Ruller Quintet, Groove Troopers and Martin Fondse’s Oktemble, Zuco 103, New Cool Collective, Fra Fra sound, etc. In 2006 Mete played the YOUNG VIP Tour with the Miguel Boelens Quintet and with the formation KINDRED SPIRITS.

Peter Broekhuizen has been active for many years in very different styles of music as both saxophone player and composer/arranger. His music is rooted in soul-jazz/funk: e.g. Sue Chaloner’s Soultrain (GB), tours through Germany and Denmark and his own power-funk band Back To Basic (3 cd’s). He toured the world extensivly from 1994 to 1998 (Japan/Asia/US/Europe) with CANDY DULFER’s Funky Stuff (several concerts with Van Morrison) and in Holland with Blue Note recording artist Trijntje Oosterhuis. He played world-music with e.g. the Mendes Brothers (US) and the Rumbatá Big Band in Colombia (2004). He toured Europe with Shirley Bassey's Orchestra and recently with the Four Tops/Temptations (US). He had a regular gig at a Dutch TV-show with many (inter-) national guests like Jan Akkerman (NL), Jocelyn Brown (GB), Patrick Bruel (FR) and many others. A beautiful new project is LAURA VANE (Brighton, UK) & THE VIPERTONES. As arranger Broekhuizen wrote the charts for the musical 'Saturday Night Fever', a production by tycoon van den Ende. He plays in and writes for his own band THE AURATONES, a soul-jazz formation with which he played many jazz festivals all over the world. 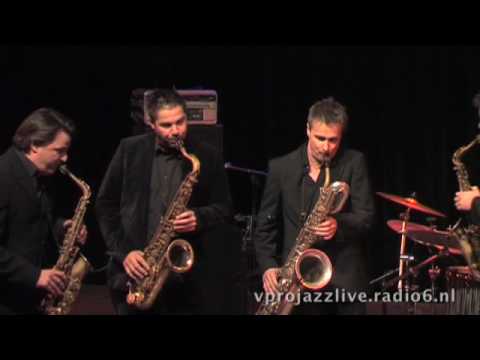 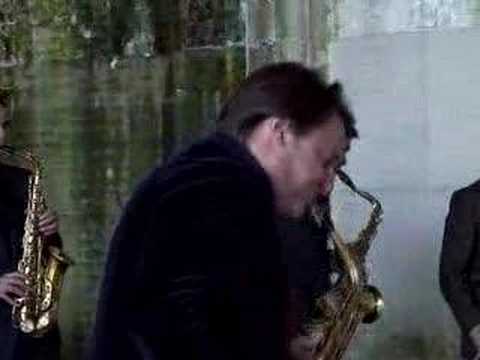 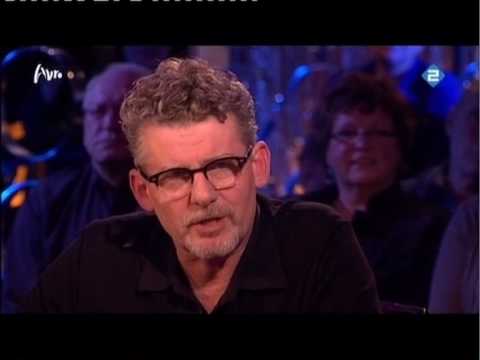