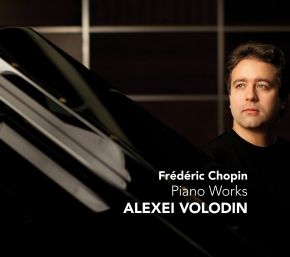 Alexei Volodin is a modest musician, enormously talented but absolutely no 'showman', because that has nothing to do with art, according to himself. When he reads or hears that he has played a piece perfectly he disagrees. He is not like a perfect machine or computer. A human being does not play perfectly and is not supposed to. Rather a human being is inspired, that is a far better word for his interpretations, also on this Chopin-cd. A magnificent recording of a internationally well-known pianist!

Chopin is seen as one of the great composers, although his oeuvre is for the most part comprised of music for piano, solo or music that has a piano in it.

Daniel Barenboim once said, "Like a concave mirror Chopins music combines and condenses aristocratic and individual personality, fantasy and awareness of form, Nationalidiom and abstraction of consummate art, whose value most be measured not by its dimension, but by its concentration. Chopins music combines, often in a small space, an almost unparalleled richness of harmony and melody, a beautiful blend of romantic expression and classical severity."

Frédéric Chopin (composer)More information
13-05-2013 Luister
"Volodin does not have any difficulty in giving color to this mulifaceted work. His superior handling of the large amount keys compels admiration."