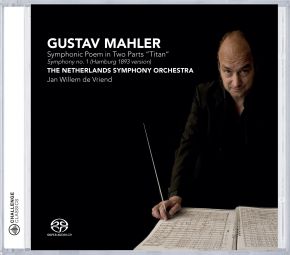 The first performance of the Symphonische Dichtung in Zwei Abtheilungen (Symphonic Poem in Two Parts), later his First Symphony, was conducted by Mahler in Budapest on 20 November 1889. It got a cool if not hostile reception, mainly because of the ‘bizarre, vulgar and cacophonic extravaganza’s’ of the last two movements. At least this was how it was felt, with the public and the critics in bewilderment especially after the finale’s unsurpassed ferocity. The final chords were followed by utter silence, until a few members of the audience hesitantly began to applaud, quickly interspersed with demonstrative sounds of disapproval. Mahler left the hall in devastation, roaming through the dark streets, like an ‘outcast’. Such hostility we cannot imagine anymore with this wonderful music today.

The version which is used on this recording is the 1893-restored version. It comprises two parts and five movements. Part one, called ‘Aus den Tagen der Jugend’: (From the Days of Youth): ‘Blumen-, Frucht- und Dornstücke’ (Flower-Fruit-and-Thorn-Pieces), contains the first three movements: 1. Spring goes on and on; 2. Andante – allegretto (‘Blumine’) and 3. Scherzo (‘Full Sail’). Part two, ‘Commedia umana’ (Human comedy), consists of 4. Funeral March in Callot’s manner and 5. Finale: From Inferno to Paradise.