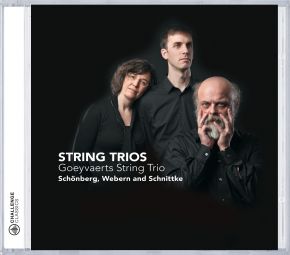 "Composers clearly tend to write string trios at crucial moments in their life or development as artists.

On 2 August 1946 the 72-year-old Schoenberg had a massive heart attack. He wrote his trio between 20 August and 23 September, while still in full recovery. He told his friends and students that the work formed an account of the traumatic experience of his illness. In his short essay Mein Todesfall, he even managed to see the humorous side of the experience. His pupil Leonard Stein recalls that Schönberg apparently meant the many strange, seemingly incoherent events in the trio (String Trio op. 45) as a musical depiction of his delirium after the heart attack. Pain and calm alternated unpredictably.

The String Trio op. 20 (1927) by Anton Webern (1883-1945) met with resistance at its appearance. The anecdote about the cellist James Whitehead, who during a concert in London’s Wigmore Hall left the stage after several bars announcing ‘I can’t play this thing’, is unfortunately all too well known. Whitehead called Webern’s music ‘a nightmare - not music at all, but mathematics’. By labeling the music ‘mathematical’, at the very least Whitehead revealed his vague sense of this music’s structural and compositional inventiveness. Webern’s trio is, like Schönberg’s, a dodecaphonic work, although dating from two decades earlier.

In contrast to Schönberg, Webern and Berg, Schnittke was clearly generous in his compositional style. Generally speaking, his compositions exhibit somewhat less of the rarefied succinctness that finds its most extreme expression in Webern’s music. The composition of this string trio seems to have been a very intense emotional experience for Schnittke. It is fairly well known just how much Schnittke, as a Soviet composer, suffered under the cultural isolation imposed on him by the Soviet authorities. Schnittke came from a cosmopolitan milieu (he was the son of a Jewish father and his mother was of German origin). Thanks to his father’s job he had spent part of his student years in Vienna. This explains the fact that this trio has the sound of a somewhat melancholy backward gaze on the Viennese music of such composers as Schubert, Mahler and Berg – works that he had learned in his youth." (Elise Simoens in the linernotes with this CD).

Dear Challenge Records,
I am the Review Editor of Instrument Page Internet portal. Our reviews on music records are very popular in Hungary CD Reviews
( http://www.muszeroldal.hu/news/recordreviews2010.html ). We plan to review also the releases below

Beethoven: Symphonies Vol. 1 & String Trios CDs
in the 2010 August issue of our Newsletter (sent to 18 5000 e-mail address). Please advise me whether you could send promo copy of these releases.