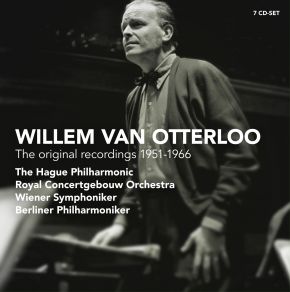 Van Otterloo’s recording career began in 1946, while he was still conductor of the Utrechts Stedelijk Orkest. He made twenty recordings for Decca with The Hague Philharmonic, all on fragile 78-rpm black shellac discs, mainly accompanying Dutch opera singers and a single violin soloist, Zoltan Szekely (Glazunov’s Violin Concerto). One exception – much to the displeasure of The Hague Philharmonic’s then-conductor – was Brahms’s Tragic Overture, recorded in 1947. In 1950 Philips introduced the long-playing record, the ‘LP’, and from the outset Van Otterloo was the label’s ‘house conductor’ and The Hague Philharmonic the house orchestra.

Of Philips’ first eight LPs releases, half are with WvO/RO. This collaboration would continue until 1961: he recorded a total of 121 compositions with The Hague Philharmonic, all but one in the spacious acoustics of the Concert-gebouw in Amsterdam. In addition to his own orchestra (RO), Van Otterloo made two recordings with the Netherlands Radio Philharmonic Orchestra, two with the Berliner Philharmoniker, seventeen with the Wiener Symphoniker and two with the Royal Concertgebouw Orchestra for Philips Phonographische Industrie. Philips also brought Van Otterloo to Paris in 1953 to record six compositions by Hector Berlioz with the Orchestre des Concerts Lamoureux – works that by all rights should have been included in this collection, were it not for the fact that they are substandard recordings, made in a bone-dry hall devoid of all acoustics.

After the contract with Philips ended in 1961, WvO/RO made six recordings for DGG, including two particularly fine performances of Haydn’s Symphony No. 45 and Symphony No. 55 (WvO/RO Box 1, Challenge Classics CC 72142).

Following a lull in his recording career – just ten recordings for the budget label Muzikale Meesterwerken (Concert Hall) – Van Otterloo resumed his recording activities in Australia: six recordings with the Melbourne Symphony Orchestra for ABC and twentysix with the Sydney Symphony Orchestra, issued by WRC, ABC, AMC, RCA and Chandos. In addition to a number of contemporary Australian composers, highlights from this period include Mozart (Gran Partita), Frank Martin (Petite Symphonie Concertante), various works by Debussy and Ravel, and an album with seven works by Beethoven. In July 1978 he recorded Stravinsky’s Le sacre du printemps with the Sydney Symphony Orchestra. Two days after the final recording session Van Otterloo was killed in an automobile accident in Melbourne. He was 70 years old. (source: linernotes with cd The Original Recordings 1951-1966 )

Residentie Orkest The Hague (orchestra)More information
Wiener Symphoniker (orchestra)More information
01-08-2011 Fono Forum
"The Label Challenge, which already released a considerably collection of van Otterloo's recordings, now releases a further box with recordings from 1951 to 1966, which shows once again the wide repertoire of the consuctor and his upright handling with the score."