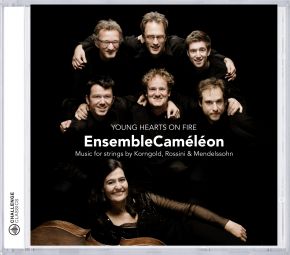 Undeniably, the three composers sound like adults, each in his own way. Rossini was twelve when he wrote his Sonata No. 6 for Strings; Mendelssohn was about fourteen when he composed his tenth of twelve string symphonies; Korngold was seventeen or eighteen when he composed the String Sextet. All three works contain the diverse emotional moods that you would expect from adolescents. However, they convey a subtlety and token of experience that do not fit boys of this age. ‘You do not have to experience love to be able to write about it,’ Korngold told his paranoid father.

In Korngold’s case, music transcends age limits. He knows how to consider his great examples Richard Strauss, Mahler and the early Schönberg in creating a totally new language that is both musically and emotionally 'complete' and 'rich'. (from the linernotes of this CD by Vrouwkje Tuinman)

Later, Korngold would conclude that he never wanted to become a composer. ‘I only did it to make my father happy.’ He succeeded, but at a price. Forced by his father into a reactionary musical harness, Korngold never managed to break free. To modernise and develop along with his time. As a film composer, he would become highly appreciated, but he would never be able to match the successes he had as a teenager.

Rossini, on the other hand, would always follow his own course. That meant that he would stop in the prime of his career to focus on other things: travel, meeting friends, sleeping and enjoying food. That is why his success had no chance to fade.

Of the three, Mendelssohn is the one who, during his upbringing and later in life, would find the best balance between sense of duty and enthusiasm. ‘I want to be home, enjoy my family and compose diligently. I see all the rest as meaningless,’ he wrote, and he lived by these words. (from the linernotes of this CD by Vrouwkje Tuinman)