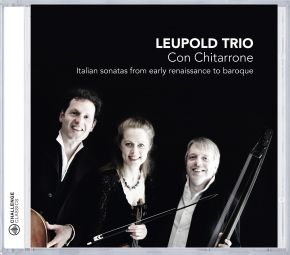 The Leupold Trio made its debut in 2003 at the International  Guitar Festival ‘SaitenSprünge’ in Bad Aibling (Germany) and was an  immediate hit. The trio is made up of members from the  Combattimento  Consort Amsterdam. The Leupold Trio performed in prestigious concert  venues, like the Concertgebouw (Amsterdam) as well as numerous museums,  historic manorhouses,  picturesque churches and castles. They appeared  with great success on the Ravello Festival 2009 (on the Amalfi coast,  Italy), in Granada (Spain) and in Algeria. Sören Leupold  studied in Osnabrück and Cologne. He can be heard playing the  chitarrone, Baroque lute and guitar with some of the leading early music  ensembles such as Cantus Cöln, Musica Antiqua Köln, Collegium  Vocale  Gent and La Fenice in Germany, The Netherlands, Flanders and England.  The violinist Eva Stegeman is concertmaster of Sinfonia Rotterdam  and director of the European Union Chamber Orchestra, which she  conducts from her first-seat position. In 2003, she founded the annual  International Chamber Music Festival The Hague, of which she is artistic  leader. Stegeman plays a late 17th-century violin made by Giovanni  Battista Rogeri (Brescia). Wouter Mijnders is at home with the  entire cello repertoire, from the Baroque to the present day. He has  made a specialty of playing the violoncello piccolo and recorded with  the Combattimento Consort Amsterdam the first CD of the unique  Concerto in C for violoncello piccolo by Sammartini. With the bowed and  plucked strings, these style-conscious musicians perform the most  beautiful of the well-known and most exciting of the lesser known  works of the 17th and 18th centuries. ‘Absolute harmony and perfect  magic in sound,’ wrote the Oberbayerisches Volksblatt in 2004. ‘A  veritable feast for the senses.’