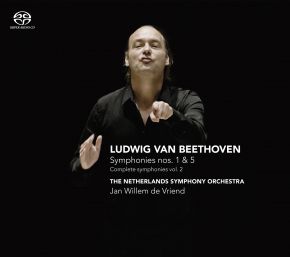 According to the conductor Jan Willem de Vriend, in the Fifth Symphony  you can hear the repressiveness and authoritarianism of the period of  the Metternich government (with the reactionary Klemens von Metternich)  in Vienna. It rings out in the motif of the first movement, and the  entire symphony seems like a process of breaking free from it. However,  every limitation can in itself present a kind of “freedom,” as certainly  was the case with Beethoven’s deafness: not being able to hear the  world around you creates the freedom to be able to hear yourself and use  that  experience to compose. The end of the Fifth has enormous riches  of sound, with the piccolo as highest instrument and the contrabassoon  with the trombones as lowest. It is like a triumphant march celebrating  victory and sounds like liberation: it is irrepressible, you can feel  it, the triumph. So it was in Beethoven’s life, not only personally,  owing to his physical limitations, but also socially: how the Viennese  were oppressed by the Metternich government, an unimaginable  disappointment after the French Revolution. What had happened to  freedom, equality and fraternity?

De Vriend has and continues to  intensively study Beethoven – the man, his music, his time, teachers and  predecessors – in order to gain the most complete image possible to  serve as a framework for comprehending the symphonies. It is a  never-ending study through which he keeps developing further insights,  making each of his recordings of Beethoven’s symphonies valuable.  Recordings, after all, convey not just the artistry of the composer, but  of the conductor and his orchestra as well. (fragment of the linernotes  by Valentine Laoût- van Leeuwenstein)