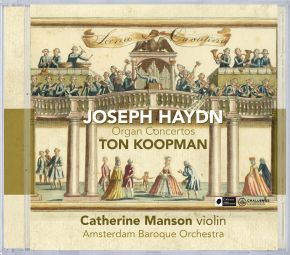 It is unclear how many organ concertos Joseph Haydn has written in total. Several of them are of doubtul authorship. Previously, ten concertos were attributed to Haydn, but these days, scholars have serious doubts about at least four of them. There is also discussion about the particular solo instrument for which the concertos were written. In the second half of the 18th century, the German word ‘Klavier’ denoted at least four instruments: pianoforte, harpsichord, organ en clavichord. There is little chance that these concertos were written for clavichord, mostly because it is unable to produce the required volume. The pianoforte is an instrument that plays a more prominent role in Haydn's later works, but was not yet in fashin when Haydn was 'Kapelmeister' at the court of Esterhazy.

There are also some indications that Haydn himself had the organ or harpsichord in mind for instance for the Concerto in C Hob.XVIII. He mentions so in the so-called ‘Entwurf-Katalog’, in which Haydn listed all of his own works.

These early concerto's are not about 'showing off' of one's solistic qualities, but more about the creative mixture and combining of solo and tutti, and finding new colours.

I adore Haydn as a composer