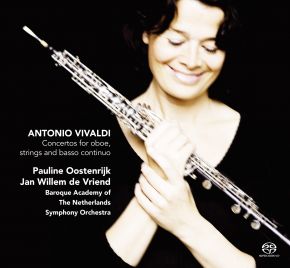 Girls who play the oboe: today, there are many of them.... Yet I still  believe that a woman with such a thing in her mouth was considered  unseemly, at least up until the middle of the twentieth  century. The  image was, after all, probably too suggestive of other things. And let’s  be honest: it’s not exactly the most flattering instrument to play, is  it? That’s exactly why the world’s very first female oboist gave it up  straight away.

In Vivaldi's time there was an orphan girl named  Pelegrina who spend most of her life at the Pio Ospedale della Pietà.  Pelegrina was by far the most accomplished oboist when Vivaldi worked at  the Ospedale (the only other oboist mentioned in the archives is one  Susanna, in 1726), we can assume that a number of the oboe concertos  featured on this CD were also written for, and performed by, Pelegrina (source: linernotes of this cd written by Pauline Oostenrijk)

Pauline Oostenrijk dedicates this cd to this special oboe girl with the very touching words: To you, Pelegrina dall’ Oboè, who came into this world with so little; but
who managed to breathe colour and lustre into life with that beautiful, yet so obstinate, double-reed instrument; and who inspired one of the greatest Baroque composers to create little gems we can enjoy to this very day.