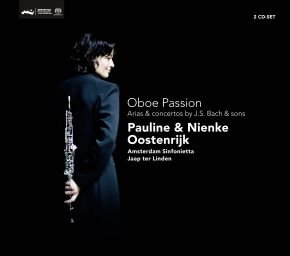 A double-cd with in the leading roles two sisters: Pauline and Nienke Oostenrijk. Pauline plays on both cd's: one with Arias for Soprano and Oboe and one with Oboe Concertos. But there is another leading role except the ones of the soprano and the oboe: composer Johann Sebastian Bach! And last but not least also two of his most famous sons can be heard: Johann Christian and Carl Philipp Emanuel.

About the Arias, Pauline Oostenrijk writes in the linernotes: "from a Christian viewpoint – the cantatas were after all written for performance during church services – every conceivable human emotion is portrayed, translated into music. Exuberant joy, deep mourning, love, sadness. The texts of the arias on this CD bear witness to a profound religious devotion, but even if the texts themselves do not stir you, the masterful way they are set to music is stunning. The arias are without equal, not only in the range of moods and emotions they express, but also in the themes and motifs that Bach selects in giving musical form to words and ideas. The ultimate meeting of text and music. The ultimate meeting of the human voice and oboe, which sometimes seem to melt into each other.

Each time anew, it is a thrilling experience for us to be able to perform this music.

Amsterdam Sinfonietta (orchestra)More information
02-11-2013 De Telegraaf
"The contrast between heavenly glare and hellish rawness is completely at the service of emotional truth"
01-02-2012 Music Web International
"
This is a fine brace of re-releases packaged in an attractive SACD hybrid single-thickness double jewel case. "