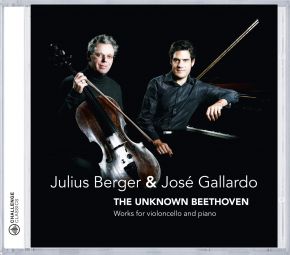 Based on my in-depth research and the many clues – which can be elucidated here only in part – I concur with Harro Schmidt, the editor of the sheet music publication by Schott Music Mainz (1984). In his preface he writes: “Contrary to all the traditional timidity in attribution and doubts about authenticity passed on to us by musicologists –  Riemann, Hess and Kinsky, for example – I regard it as proven that we have here an arrangement that was created and published under the composer’s own eyes in BEETHOVEN’S IMMEDIATE SPHERE OF INFLUENCE.”

Beethoven travelled to Prague, where he met Countess Josephine von Clary-Aldringen (1777 – 1828, married since 1797 as Countess Clamm-Gallas). She played the mandolin. Beethoven wrote several works for mandolin and piano for her; of these, four have been preserved arranged by the composer for violoncello and piano. Beethoven wrote for a mandolin tuned G-D-A-E, thus the transcription for violoncello presented no problem.

Already in 1990, Steven Isserlis edited the Variations WoO 44b for Violoncello for Faber Music Ltd., and Peters Verlag published a version of the Sonatina WoO 43a by the cellist J. Stutschewsky as early as 1931, although in D Minor, not in the original key of C Minor. I have chosen the arrangement in the original keys and as close to the original as possible.

Like Steven Isserlis, I believe that these works show “Beethoven at his most elegant”; they are miniature, refulgent jewels, which José Gallardo and I play with the greatest pleasure and success. (source: linernotes written by Julius Berger)

Linus Roth adds a new and very moving and consoling album to his discography with music by Hartmann, Weinberg and Shostakovich. You can see the in depth video of this production here What a delight, surprise, and opportunity it must be, for a musician to find an unperformed, unrecorded, entirely or relatively unknown piece of music by a major composer, indeed by one of the Greats—Shostakovich in this case. What we have ...