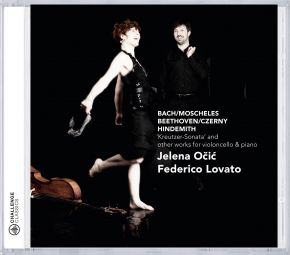 On this CD, Jelena Ocic and Federico Lovato perform five of ten preludes that the great 19th century pianist Ignaz Moscheles adapted from Bach's „Well Tempered Clavier“ and Carl Czerny's version of the „Kreutzer“ Sonata for Piano and Violoncello by Beethoven

The Sonata for Violoncello and Piano op. 11 no. 3 of 1919 by Paul Hindemith has been described as one of the young Hindemith’s key works. His stylistic horizon has widened and he has clearly taken his distance to Late Romantic models such as Richard Strauss, whose „Alpine Symphony“ Hindemith called “A whopping piece of hocus-pocus!” And, even more drastic: „The man has really gone off the rails. Rather be hanged than ever write such music!” (to Emmy Ronne-feldt, 14 Nov. 1917).   Within the context of modernism at this time, the stylistic experiments of the young Hindemith are infused far more by impressions of Johannes Brahms’ musical idiom and some of Max Reger’s contemporaries. Earlier models are also echoed: Mozart, and above all Bach