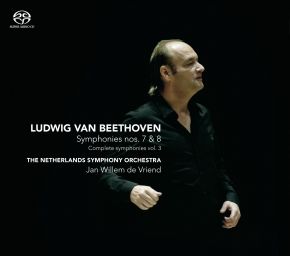 In Beethoven's life and career 1812 was an end, a turning point and a beginning. It was the end of a glorious period in which he put the finishing touches on Symphony No. 7 and wrote No. 8 – a culmination of ten years of composing at the highest level. Beethoven had come all the way. The eventful year of 1812 was also a turning point: emotional and relational crises (difficulties in love, loss of friends, problems in his family), physical and financial crises, brought him to an impasse and this affected his work. It seemed as if he had lost his unbridled energy. His deafness caused him to focus outside of himself, but at the same time he took counsel with himself as to how to go on in his work. This was a breeding ground, a beginning, for his late period, in which many of his works were even more complex, surpassing the comprehension of contemporaries. Pianist Hélène Grimaud puts it quite beautifully: “His music is strongly rooted in all that is human, with all our vulnerabilities and shortcomings, but at the same time there is an element of a Promethean struggle to overcome it, not to give up. To surmount the difficulties.”

Beethoven did not need to be modest about his Seventh symphony. In a letter to Johann Peter Salomon in London, to whom he wrote in 1815 asking him to help find a British publisher, he called it “... a grand symphony in A major (one of my most excellent works)”. In each movement of this symphony he used groups of rhythmic figures, with a leading element to set them off. Clearly, the use of rhythm was already important earlier in his career, with the first movement of No. 5 as the best known example. But in No. 7 the rhythmic action has come to the foreground; it is an underlying principle. One of Beethoven’s most famous works is the Allegretto, the slow movement of this symphony. The audience was won over, and even today it has not lost any of its popularity. It is indeed of incredible beauty. The most important rhythmic theme of the introduction comes back again and again, increasing in intensity and growing more palpable. The range, from low registers to high, and the movement from piano to fortissimo contribute to the enormous musical drama.

Things grow even more intense in the finale as the dynamic range alternates between pianissisimo and fortississimo. Ostinato patterns, variations on rhythmic figures, everything is ten times bigger. That torrential energy! It almost seems as if he has broken loose, arms lashing out in all directions. Seems, because in fact he is in control of the seeming chaos. A control that was absent in his daily life, but that he had in his music.

After the unbridled exuberance of No. 7, the audience proved not to understand No. 8 so well. About this, Beethoven is said to have told Czerny,  “That’s because it is so much better.” Beethoven chose to revert to the classical symphonic style: in retrospective. But it is definitely not a step back. For example, humour, an aspect that someone like Haydn often used in his music, is an important element here as well. But Beethoven’s humour is more acerbic. In the finale, a single tone, the C sharp (and the enharmonic D flat) is the key. The C sharp bites and stabs in a movement written in F major, and what it is ultimately about is to integrate that C sharp. This is humour of a different calibre than that of Haydn. It is so typically Beethoven and is what makes him unique. (Parts of the linernotes of this cd written by Valentine Laoût- van Leeuwenstein)