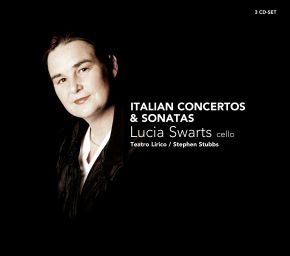 At the beginning of the seventeenth century the violin set out on its march of conquest as a solo instrument. Before then the violin was not thought highly of, but the French theorist Martin Mersenne (1588-1648) called it the king of instruments and praised it for its versatility. It lasted almost a half century before the expressive potential of the (violon)cello, the lyrical tenor and sonorous bass of the same family of instruments, was discovered.

Not without justification, the significance of Antonio Vivaldi (1678-1741) for the concerto has been compared to that of Haydn for the symphony.

Also under the influence of virtuoso violin music, which was developing fast, composers of the 17th century were inspired to write solo music for this ‘bass violin’, too. In turn, this required ‘adjustments’ to the instrument, which was unsuit-able for virtuoso solo play, we see therefore that violin builders in the second half of the 17th century started experimenting. In almost all cases this concerned a scaling down of the instruments. Their tuning also varied. These variants were known by varying names. In 1665 we find the term of ‘violoncello’ for the first time (with G.C. Arresti).

Of Antonio Vivaldi, the most influential, original and prolific composer of instrumental music for cello of the first half of the 18th century, we know nine cello sonatas. Then came Luigi Boccherini, a cellist but above all a visionary composer. He introduced the thumb position and thereby established a new historical record with b’’ flat as the highest note. Luigi Boccherini (19 February 1743 - 28 May 1805) was already a celebrity during his lifetime. This contemporary of Mozart made his début as a cellist at the age of 13 in his native town of Lucca and soon became a respected virtuoso in local musical circles.

Boccherini was an extraordinarily fertile composer, especially of chamber music. He wrote 32 sonatas for cello. In this CD box we can listen to four of them. Vivaldi wrote some very special pieces, but as far as Lucia Swarts is concerned Boccherini leaves him far behind. That cantilena, that Italian singing style, Boccherini could bring it out with greater prominence than any other composer. In the past the cello functioned as a bass instrument. With Vivaldi it acquired something of a tenor voice, but in the end it was Boccherini who knew how to use it as a perfect alto instrument. According to Lucia Swarts to cellists Boccherini is supremely important.

Luigi Boccherini (composer)More information
01-01-2012 Music Web International
"This set is a garden of pleasure for every cello fan. Purchase and enjoy!"