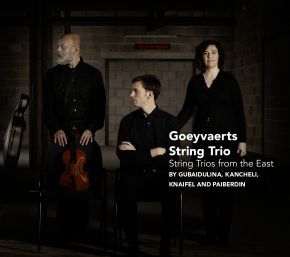 All the music on this recording has at least one thing in common: it seeks to find the oak tree in the acorn, or William Blakes ;world in a grain of sand”.  One might almost write “grain of sound”, because all these works begin with very little — a note or two, something not far removed from silence, a seed that gives rise to an entire, and frequently paradoxical, world of consonance and dissonance, monologue and dialogue (and, here, trialogue), growth and retrenchment, height and depth.

Another common element between these works is that they were all written by musicians from different parts of what used to be the Soviet Union: Knaifel and Paiberdin are Russian, Gubaidulina also, though of Tatar heritage, and Kancheli is Georgian

Their highly economical attitude towards sound — we are not talking here about minimalism, but rather a kind of maximalism, expressed through limited musical means that can initially give the illusion of being minimal (a world in a grain of sand) — corresponds to the extreme, often fragile, states of spirit with which they deal, and which could only have been arrived at by musicians with such a background.

The Goeyvaerts Trio worked/rehearsed extensively with all of these composers personally and the result comes near to perfection!