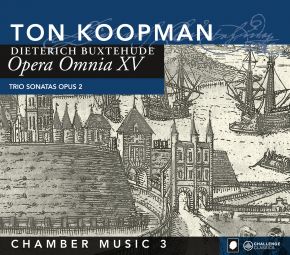 The first Buxtehude Opera Omnia recording is steadily approaching completion. The harpsichord and organworks are finished and this is the final volume of the chamber music. All that remains are a number of vocal challenges! Buxtehude’s trio sonatas form a unique repertoire. Due to their formidable technical and musical demands, they have rarely been recorded. Stylus phantasticus, an unprecedented inventiveness, superb lines, improvisation, the list goes on... Buxtehude once again proves himself to be a great master. Although there are occasional touches of Corelli to be heard, the music is above all quintessentially Buxtehudian. It was a phenomenal experience to record these sonatas.

In the last decade of the 17th century, Dieterich Buxtehude published  within a period of two years a group of fourteen instrumental chamber  sonatas in two sets of seven each. Thereby, he contributed in a major  way to a new and fashionable repertoire of trio sonatas that had  originated in Italy after the middle of the century. Giovanni Legrenzi  (1626-1690), the Venetian composer, had played the main influence in  spreading a new type of instrumental music north of the Alps. His works  published in the 1660s and 70s were well known in the Hanseatic cities  around the Baltic Sea. Lübeck, one of the principal music centers in  Northern Europe, was no exception in this respect. Buxtehude, who served  as organist of the St. Mary’s Church in Lübeck from 1668 until his  death in 1707, picked up and integrated the modern Italian style early  in the instrumental introductions to his sacred concertos and cantatas,  but turned to instrumental chamber music only late in his life.

Every  single sonata presents different solutions in regard to section  sequences; no two pieces show the same pattern. In general, the fast  sections prefer more or less elaborate polyphonic and fugal designs  whereas the slow sections emphasize harmonic and expressive features.  Sections are sometimes connected without interruption, sometimes  separated by fermatas or double bars.  Towards the end of some phrases  the violin makes use of double stops, in line with the overall virtuosic  design of the sonatas. The compositional ideas pursued by the composer  are based on the concept of the so-called “stylus fantasticus,” a manner  favoured in keyboard and soloist instrumental ensemble music of the late  17th-century in North Germany. According to the 18th-century Hamburg  writer Johann Mattheson, “this style is the most free and unrestrained  manner of composing, singing, and playing that one can imagine, for one  hits first on this idea and then upon that one, since one is bound  neither to words nor to melody, only to harmony, so that the singer and  player can display his skill

Dieterich Buxtehude (composer)More information
01-08-2012 Early Music Review
"With such a team as Catherine Manson (violin), Paolo Pandolfo (viola da gamba), Mike Fentross (lute) and Ton Koopman on harpsichord and organ one cannot expect anything but playing that is exciting yet expressive, where the music immediately comes alive."