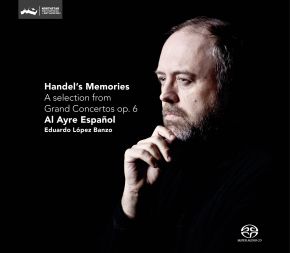 Something new and something borrowed. In the days that Handel lived, it was common to use an existing melody and make it your own. Handel's Grand Concertos contains a surprising quantity of newly composed material, as well as some borrowings, such as the memories or musical anecdotes, written with intense lyricism and certain sentimentality, previously absent from his instrumental music.
His “operatic” Concerto No. 8, written in the ill-natured, though also lovely, tonality of C minor, is one of the most dramatic in the collection, and concurrently possesses one of the most interesting structures. It starts with a movement based on the main motif of an allemande – “a German piece” – by Johann Mattheson, published in his Pièces de clavecin (London, 1714, the same year as Corelli’s concerts).

The Componimenti Musicali by Gottlieb Theophil Muffat, with whom the German composer exchanged music during the 1730s, provide Handel with some ideas from which he builds formidable orchestral movements in these concertos. “He takes other men's pebbles and polishes them into diamonds”, the British composer William Boyce used to say of him. It could not be more true when we observe the use Handel makes of these and other loans. Al Ayre Espanol with this performance makes us aware of the sheer beauty of this music, which always turns into gold in the hands of master Handel: new or borrowed. Grand concertos grandly performed!

Hi guys, this is a terrific album! Still, track number 5 has only 4 seconds of duration and this is not right, it should be around 3 minutes.

Georg Friedrich Händel (composer)More information
01-03-2013 hifi & records
"Absolutely listen to it!"
01-10-2012 Early Music Review
"As fresh and exciting a recording as you would expect from Al Ayre Espanol. A must-have recording."