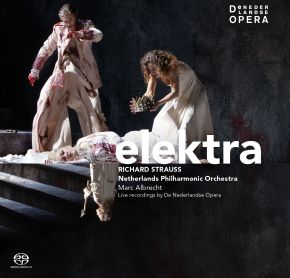 "Elektra - Tragödie in einem Aufzuge" - with the libretto by Hugo von Hofmannsthal had its world premiere on January 25th 1909 in the Hofoper in Dresden. The performances of "Elektra" which were used for this cd production were made in november 2011 in the Amsterdam Muziektheatre with the Netherlands Philharmonic Orchestra, the Toonkunst Choir Amsterdam and soloists all conducted by Marc Albrecht.

Elektra lives in a no-man’s-land – a region inhabited by no one else. It is for this very reason that she occupies this region with unwavering determination, for only here can she validate the essence of her being: contradiction.  She is at one and the same time nobody and more than everyone else; she lives here, but she is in fact also dead. She remains at the place of her youth, but never sets foot in her family home. With all these discrepancies, she is the embodiment of contradiction, in two senses: as contradiction in and of itself and in relation to the outside world, against everything and everyone, everywhere and always. The scene of this contradiction is the threshold, where she continuously dwells and which is not an actual place or, better said, is a non-place, a no-man’s-land. (written by Willy Decker)

Dear Kevin, we expect it really soon now, one of the coming days or weeks!

Dear Kevin, we expect it really soon now, one of the coming days or weeks!

When can i order this cd?

The CD will be released on November 9th.

This is a thrilling Elektra."