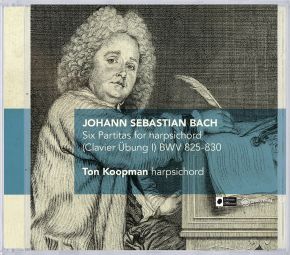 For a long time Baroque and Bach specialst Koopman wanted to record this masterpieces of Bach and now was the time to do it! Recorded in the trusted and beautiful-sounding Walloon Church in Amsterdam.

My recording of Bach’s harpsichord partitas was a long time in coming. The main reason was a lack of time (recording Bach’s complete organ works, complete cantatas and Dieterich Buxtehude’s Opera Omnia required much time and  attention). Another factor was my respect for these masterpieces by Bach – they are not something to just fit in between other projects. I already had plans to record them in the 1990s, for Erato, and now that I finally am able to, it is for my own label. They were recorded in the trusted and beautiful-sounding Walloon Church in Amsterdam, with the famous recording duo of Tini Mathot and Adriaan Verstijnen, using my own Kroesbergen/Ruckers harpsichord and Werckmeister III tuning.

The Library of Congress possesses a printed copy of the Clavier-Übung that has Bach’s own handwritten notes and additions. There has been discussion about the meaning of these, but I think this  copy gives definitive answers – these are corrections and additions made by Bach himself that do not appear in any modern editions of the partitas. Christoph Wolff talks about them in his introduction in this CD booklet. Significant, for example, is the addition in Bach’s hand to the second partita, in the transition in the sinfonia from its second to third section: there stands allegro, and a measure later, adagio. Until Christoph Wolff made this discovery, nobody knew what to do with these measures, and even now they are seldom or never played this way.
Ton Koopman

Johann Sebastian Bach (composer)More information
01-08-2013 Early Music Review
"This is altogether a very welcome recording indeed from a great player in his full maturiry."
01-07-2013 BBC Music Magazine
"Putting the art in Partita"
01-07-2013 Toccata
"Ton Koopman plays enthralling from the beginning with brio, disarming sovereignty and exuberant enthusiasm"
01-05-2013 Grammophone
"Big effects are a hall mark of Koopman's style. The playing throughout these suites is consistently extrovert and red-blooded, with frequent changes of registration on the robust Ruckers-style instrument by Willem Kroesbergen. [...] Koopman creates a rich drama of dymnamic contrasts, thin flutey sounds alternating with grander, thicker, coupled passages, in orchestral style."
22-04-2013 Luister
"In the end, Koopman's vision might be too animated in some parts, but it is completely consistent"
klassik.com
"It is impressing, with which kind of self-conception and meticulousness Koopman approaches to each composition."