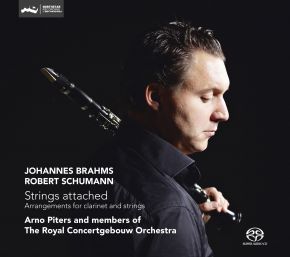 Nowadays interest in arrangements is on the rise again, not only in historical adaptations, which shed an interesting light on earlier musical performance practice, but also in contemporary variants.
In my arrangements on this CD only the piano music has been adapted, and the clarinet scores are unchanged. Stylistically, I have tried to stay as close to the originals as possible. Except for a few altered chords and solutions for a number of typically pianistic parts, the notes from the originals are unchanged.

As Schumann and Brahms were inspired by the musicians for whom they wrote these works, in working on the score I also had in mind certain musicians whose musical qualities aroused my enthusiasm. While the arrangement of the sonata in F minor was written at the request of clarinettist Hein Wiedijk, my scores of the E flat major sonata and the Fantasiestücke were written at the request of clarinettist Arno Piters:

Robert Schumann (composer)More information
Members of The Royal Concertgebouw Orchestra (orchestra)More information
20-07-2013 Scotland On Sunday
"Neither Brahms' Sonatas in F Minor and in E flat Major, nor Schumann's Fantasiestücke are easy to perform, requiring strong technique, timing and intonation, which Arno Piters is well able to provide."
01-07-2013 BBC Music Magazine
"We now have a Brahms clarinet sextet and septet, arranged from his clarinet sonatas. The inclusion of the double bass sounds unidiomatic - but some lovely playing."
13-06-2013 Audiophile Audition
"Arno Piters’s playing is as mellifluous as can be "
05-05-2013 The Independant on Sunday
"The soundworld (shaped by arranger/composer Geert van Keulen) is notably darker than Brahms's orginal, but the result is fluid and idiomatic. Clarinettist Arno Piters is hansomely supported by his colleagues from the Concertgebouw."
15-02-2013 Platomania
"Arno Piters makes a great album with the members of the Royal Concertgebouw, the clarinet blends in beautifully with the strings."
MDR Figaro
"A very nice Brahms - it is worth it, get in touch with the late works in this way."