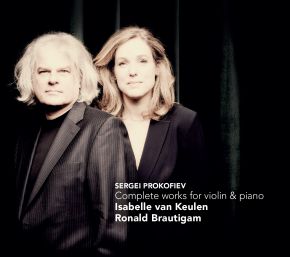 
Prokofiev’s works for the combination violin and piano limits itself to these few works, of which two are transcriptions by the composer himself. The Second Sonata was originally written for flute and piano, the Five Melodies are transcriptions from five songs written for the soprano Nina Koshetz in 1920. Misleading are also the opus numbers and titles of both Sonata’s: the Second Sonata in D major opus 94 had it’s premiere before the First Sonata in F minor opus 80. In 1943, in the middle of the chaos of the Second World War, Prokofiev composed the abundant Second Sonata opus 94 for flute and piano, the piece was premiered on 7th December 1943 in Moscow by flautist Nikolaj Charkovski and Swatoslaw Richter. David Oistrach was in the audience, and was so enthusiastic that he suggested Prokofiev after-wards to arrange the piece for violin and piano.

The piano part remained exactly the same, the flute part was transcribed for violin in collaboration with Oistrach. The premiere of the violin version took place on 17th June 1944. The first movement is strongly dominated by a repeated, gentle pastoral, alternated with rhythmical passages with a more martial character; the idiomatic material reminds in parts of Prokofiev’s 5th Symphony, which was composed in the same years.
The second movement is a Scherzo with a slender Trio, the following third movement is written in the shape of a Serenade in three parts: In the first part one is reminder of the balcony scene of Romeo and Juliette, the middle part is rhythmically more emphasized, only to be merged in the last part. The last movement is a Rondo, full of life and energy, and so overwhelming, that one could mistakenly take it for irony in it’s expression. This work, described by Prokofiev himself as a work in a 'gentle, flowing style', has been a favorite both with violinists and flautists, not in the least because of the contrasts between long, lyrical lines and deep feelings on one hand, dancing theme’s, humor and pathos on the other hand.

Darkness on the contrary is the main atmosphere for the First Sonata opus 80, premiered by commissionist David Oistrach, with pianist Lev Oborin. The rehearsals took place in presence of the composer, who
constantly prodded the artists to go to their limits of dynamics and expression. „Like a wind on a grave yard“, was the composer’s wish for the execution of the fast scales, con sordino, at the end of the first and last movement, to David Oistrach, who was deeply touched by the beauty and musical depth of this sonata. Prokofiev started composing his First Sonata in 1938, a time in which about 7 million Russians were locked- in in the prison camps, and another half million high society civilians were murdered. Two years previously he had returned to the Sowjet Union, he was composing non-stop and put the work on the sonata aside various times, in favor of composing several ballets, opera’s and film music; in this time he also composed the monumental piano sonata’s number 6, 7 and 8.

Sergei Prokofiev (composer)More information
17-05-2013 Fono Forum
"Beautiful, good, huge"
22-04-2013 Luister
"their strong interaction has a pronounced narrative personality."
02-04-2013 The Strad
".. the composer's five melodies came across as a carefully crafted sequence of miniatures, sophisticated both for van Keulen's alluring tone and the imaginative dreamscapes she created."
01-04-2013 The Strad
"Van Keulen's account of the anguished work, at times pretty harrowing, feels like a true emotional journey with a superb control of light and shade, elegant yet meaningfully shaped phrases and a sure sende of pacing."
31-03-2013 Pizzicato
"Challenge Clasics has been awarded with the Pizzicato's Supersonic award. "
26-03-2013 The Strad
"What emerges most clearly, [...], is her astonishingly adaptable, flexible sound, with vibrato, tone, attack and phrasing all shifting second by second in response to the music."
01-03-2013 International Record Review
"The modern contender, benefits from very good and well balanced sound that is well beyond those sometimes primitive mid-century Soviet Recordings."
01-03-2013 Record Review
"It's quite revealing to contrast the modern, lean sensibility of van Keulen's playing with the liquid shifts and fulsome tone of Oistrakh."
08-02-2013 Mania klassiek
"A beautiful recording of two of the most experienced and leading musicians of our time"
06-02-2013 klassik.com
"exact, spotlessly clean, metallic lucent and wild in the mechanic motor activity"
06-02-2013 klassik.com
"An almost ideal mix."
19-01-2013 De Telegraaf
"With Van Keulen and Brautigam you experience their years of conjuction. As duopartners they are more evenly well-matched. The depth and vibrancy really benefits from their open approach. "
musicweb.com
"Isabelle van Keulen, a winner of BBC Young Musician of the Year in 1984 is a superbly sensitive player who reveals every nuance in these wonderful works."
Ensemble
"A terrific recording!"