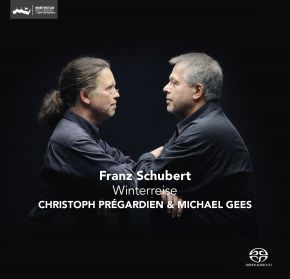 Schubert's "Winterreise" is one of the most famous song cycles that exist in classical music and musicians take it up again and again because of its beauty, sorrow and depth. It is about life itself and which performer does not want to give his or her opinion on life? Both tenor Christoph Prégardien and pianist Michael Gees have their own vision on the cycle. Playing together, a third view develops, combining their two visions into an exciting interpretation of Winterreise.

In this production the music lover has more ways than one to enjoy this Lieder cycle to the fullest.

Franz Schubert (composer)More information
03-03-2014 Luister
"Gees and Prégardien understand each other exactly in small liberties in tempo and dynamic accents"
29-09-2013 www.sonograma.org
""It invites us to participate in the musical journey of two excellent musicians""
25-09-2013 www.opusklassiek.nl
""So sings Prégardien and so guides Gees. You can hear in each measure how they have grown together over the years. Deeply touched, tragic and at the same time an overwhelming authenticity""
02-09-2013 BBC Music Magazine
"5 out of five stars ***** for Recording and Performance
"Winterreise proves worth the wait"
"This Winterreise has a visionary quality that only the best achieve.""

01-09-2013 BBC Music Magazine
"The Voice is in superb form, sensing out the underlying pulse and the minutest inflections of longing, delight, determination and soul-weariness within each lithe, live line of melody. Accompanying, Michael Gees has freshly reconsidered so much detail, too - possibly, it seems to me, with an ear to Schubert's late piano music."
01-08-2013 Early Music Review
"This is beautiful singing by a master of his craft, and Prégardien brings to the cycle his early-music-specialisation qualities of precise diction, tuning and articulation"
01-08-2013 Early Music Review
"This is beautiful singing by a master of his craft [...]. Michael Gees is a perfect accompanist, and allows Prégardien and the music plenty of room to breathe. [...] I was immediately captivated by the sheer beauty of the singing, the quality of the vioce and especially by the feeling that this man just 'lives' Winterreise."
25-07-2013 Luister
"The expression is more interiorized, where Gees and Pregardian unsterstand eachother precisely and feel each other dynamically exquisite."
01-07-2013 Fono Forum
"Christoph Prégardien and Michael Gees satisfy completely"
17-06-2013 Luister
"With every song a suprise in accent or detail."
06-06-2013 Kulturradio am Mittag
"Three elements complete each other at this production in an almost perfect way: the piece of art, its congenial interpretation and the latest audio- and videotechnology, which supports the music in a professional and elegant way. "
02-06-2013 Sunday Times UK
"This is a powerfully original performance of Schubert's journey into the distracted mind."
02-06-2013 Sunday Times UK
"This is a powerfully original performance by Schubert's journey into the distracted mind."
31-05-2013 www.writteninmusic.com
""Even if singing and music are getting maintaining the delicate of balance of sound between piano and tenor exuberant""
29-05-2013 Klassieke Zaken
"Christoph Prégardien and Michael Gees leave without a doubt sufficient room for imagination and ample opportunity to bring the protagonist from fantasy to life through SACD."
20-05-2013 The Scotsman
"Prégardien's ability to shade and mutate the delicate emotional inflections with almost imperceptible subtlety personalise this account, coupled with Gee's string but reflective playing."
20-05-2013 The Scotsman
"Tenor Christoph Prégardien and pianist Michael Gees are a class pairing when it comes to the heart of German lieder"
15-05-2013 Knack Focus
"5-star review ***** Christoph Prégardien, one of the most inspiring singers of his time, partners with Michael Gees: an experienced chamber musician with vision, who not only serves the singer, but will also retort."
08-05-2013 Volkskrant
"Gees makes the chords blend, erases nuts, all to make the text and desolate mood of the record sensible and Prégardien is happy to accompany him. The result is this Winterreise which sounds as an autobiography."
04-05-2013 De Telegraaf Weekeinde
"Master storytellers at work. Their performance is so good that interpretation and music seem to melt together. "
03-05-2013 Mania Klassiek
"From the start Prégardien takes you on a journey, which is controlled and dramatic at the very right moments. "
29-04-2013 Bayrischer Rundfunk
"this recording proves a deep comprehension and intensiveexamination with Schubert's compositions"
10-04-2013 NDR
"The tenor is still focusing on pure sound and on a natural speech formation. A mixture which moves to tears"
10-02-2013 Du Holde Kunst
"Gripping, beautiful and colorful Winterreise"
01-12-2012 Gramophone
"Pregardien remains at once one of the most scrupulous and moving interpreters of winterreisse. "
Das Opernglas
"Prégardien goes consciously to the limits of his voice"