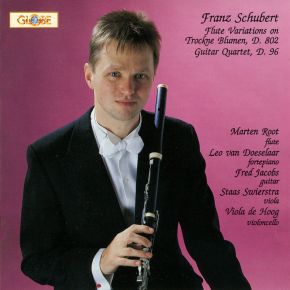 Leo van Doeselaar studied organ at the Amsterdam Sweelinck Conservatory from which he graduated in 1978 with the Prix d'Ecellence. He also graduated from this Conservatory as pianist In 1981, Leo van Doeselaar received several awards, including an important one from the Sociely of Friends of the Concertgebouw. Active as soloist, ensemble player and accompanist, he also forms an extremely successful piano duo with Wyneke Jordans.

Fred Jacobs studied baroque lute and theorbo with Anthony Balles and is a member of several internatlonal baroque ensembles, among them the Locke Consort of which he was one of the co-founders. Fred Jacobs appears all over Europe and the United States and has played with conductors such as Gustav Leonhardt, Alan Curtis, Rene Jacobs, Jos van lmmerseel and Philippe Herreweghe.