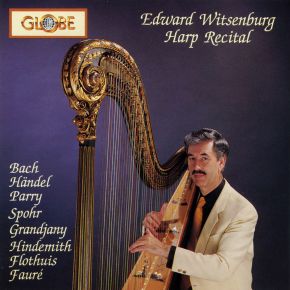 Edward Witsenburg, internationally acclaimed as one of the leading harp players of our time, begun his studies with Phia Berghout when he was seven years old. After finishing high school, he graduated from the Amsterdam Conservatory 'cum laude' with several awards. He started his career as solo harpist in various Dutch orchestras, but abandoned orchestral playing altogether in 1965 to devote himself completely to solo playing, chamber music and teaching. Edward Witsenburg performs all over the world and is the proud owner of a large collection of haprs from the Middle Ages to our time and he regularly gives lecture recitals in which he demonstrates these instruments. Since 1967, he gives yearly master classes in Wales, he is a professor of harp at the Royal Conservatory in The Hague and also holds a professorship at the Mozarteum in Salzburg.