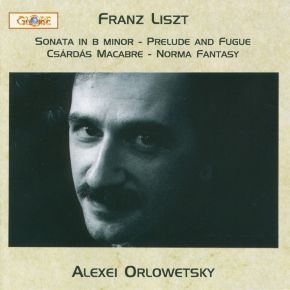 Liszt's nearly 30 minutes long Sonata in b minor is one of the great master pieces of the piano repertory from the 19th century and has already been recorded by many pianists. The unique thing about this recording of Russian piano virtuoso Alexei Orlowetsky is the use of a magnificient 1889 Erard Grand Piano, the type of instrument that Liszt himself owned and on which he composed this imposing work. The haunting Csardas Macabre is very seldom heard on records and Liszt's transcription of Bach's Prelude and Fugue (originally for organ) shows Orlowetsky's beautiful and very controlled piano technique. The Norma Fantasy, technically considered to be one of the most difficult pieces Liszt wrote, is heard here not only perfectly played to perfection, but also in one of the most rousing performances ever.

Alexei Orlowetsky was born In St. Petersburg (the former Leningrad) In 1959, his father being an engineer and his mother a physician. After receiving a special primary training from Z.B. Hohlova at the music school of the Leningrad Conservatory, he studied piano at the Rimsky-Korsakov State Conservatory with Professor G. Sokolov, composition with Y. Falik and conducting with I.A. Mussin. Nowadays Alexei Orlowetsky is himself a Professor of piano at this Conservatory. He performed with orchestras and in recitals all over the Soviet Union and in Poland. In 1989 he won the second prize at the International Franz Liszt Piano Competition In Utrecht, and in July 1990 he was awarded First prize at the 7th International Piano Competition in Valencia, Spain.