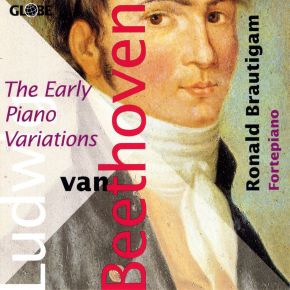 Ronald Brautigam was born in Amsterdam in 1954. He studied at the Amsterdam Sweelinck Conservatory, the Royal Academy of Music in London and with Rudolf Serkin In the USA. In 1979, he won the Ellsabeth Everts Prize for highly talented young Dutch artists, and four years later he was awarded the official Netherlands Music Prlze. Ronald Brautigam performed with all the leading Dutch orchestras, the Royal Coneertgebouw Orchestra and the Rotterdam Philharmonic Orchestra among them, with such conductors as Riccardo Chailly, Sergiu Commisssiona, Charles Dutoit, Bernard Haitink, Ferdinand Leitner, and Simon Rattle. He also regularly performs in recital. Ronald Brautigam appeared in England, France, Germnny, Belgium, Spain, Portugal, Scandinavia and Switzerland. In October 1984, he made his very successful debut In tbe USA with the Houston Symphony Orchestra, playing Mozart's Piano Concerto In A Major, K 488. In 1988, he played for the first time in Japan, with orchestras in Osaka, Sapporo and Nagoya. With the Royal Conccrtgebouw Orchestra and Frans Brüggen as conductor, he played Mozart in Salzburg in December 1991. Ronald Brautigam is Professor of piano at the Amsterdam Sweelinck Conservatory.

Next week, on July 16th Isabelle van Keulen will be in the Netherlands for a concert in the Concertgebouw in Amsterdam with pianist Ronald Brautigam.The duo will perform Mendelssohns Concerto for violin and piano together with the Württembergisches Kammerorchester conducted by Ruben Gazarian. Ronald Brautigam has several concerts this year in the Concertgebouw for his 60th birthday this year. And Isabelle will also be playing with her quartet later this ...