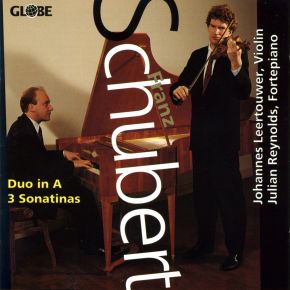 The Violin Sonata and Sonatines

Schubert's three Sonatinas, written in 1816, and his Sonata for Violin and Piano from 1817, are among the most beloved chamber music works the great composer has left us. There are, however, very few (if any) recordings of these precious pieces where they are being performed on period instruments with the composer's original sound. For this recording Johannes Leertouwer played a violin, built in 1663 by Jacobus Stainer, and the piano part was performed by Julian Reynolds on a fortepiano, built by Joop Klinkhamer after an original instrument by the famous Viennese builder Nannette Streicher nee Stein in 1814, exactly the same instrument that Schubert had at his disposal when he wrote these works. These are exceptional performances in great sound which will certainly appeal to a large audience.

Johannes Leertouwer (born 1959), is regarded as one of today's most talented young violinists. After winning several important competitions (the Oscar Back Competition in 1983 among them), and prolonged studies with Josef Suk in Vienna, he played for some time in the Amsterdam Royal Concertgebouw Orchestra, and with Ton Koopman's Amsterdam Baroque Orchestra, after which he concentrated mainly on chamber music, appearing in recitals and ensemble concerts all over Europe, striving for authentic performances on historic instruments. His repertory goes from the early Italian Baroque sonatas to contemporary music.
Julian Reynolds (London, 1962), was a pupil of Albert Ferber and Noretta Conci, and made his highly acclaimed solo debut recital in the London Wigmore Hall at the age of 19. He was also a finalist in the 1984 Busoni Competition in Balzano. He was for a time Claudio Abbado's assistant with the ECYO, co-founder and principal conductor of the European Chamber Orchestra Per Musica, conducts regularly at the Netherlands Opera and is a permanent guest conductor of the Kirov Opera in St. Petersburg. For the last ten years he has formed a regular duo with Johannes Leertouwer and as such they perform all over Europe.