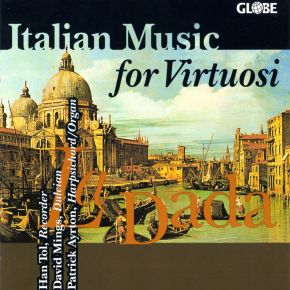 The second album of La Dada after their immensely successful record entitled "Corelli & Company". On their first first album, the program was built around Corelli and the influence he had on his contemporaries. The present record is devoted to an earlier period and shows the development of the sonata form in 16th and 17th century Italy. All of these works have been written for virtuosi, and the members of the renowned ensemble La Dada are just that: Han Tol, who plays a great variety of recorders, David Mings on an original dulcian, the predecessor of the bassoon, and keyboard virtuoso Patrick Ayrton on harpsichord as well as organ. This is an absolutely fascinating program with many pieces that have never been recorded before, while the others are also very rare to find. The combination of instruments wilh the dulcian as a melody instrument as well, makes it another unique item which will certainly appeal to baroque music lovers everywhere!

"La Dada" is the title of a composition by the Italian composer Tarquinio Merula from the year 1637. As is often the case with music from this period, it is not clear what "La Dada" exactly means. Like many of his contemporaries, Merola was a composer who has fallen into oblivion. He worked in an era where unheard-of developments took place: the "invention" of the violin, the composing of the first purely instrumental music... Merula found himself in the good company of people such as Monteverdi, Frescobaldi, Gabrieli, Stradivari, Amati, Bernini and countless others. The quality of this incredible music led to the foundation in 1984 of the Ensemble La Dada, with the aim of mapping out and unearthing as many manuscripts and old prints as possible and presenting the ultimate result of all this on the concert platform.