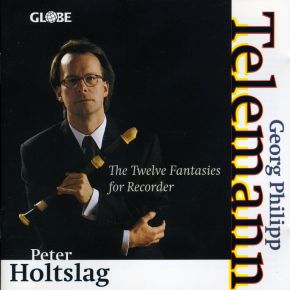 Telemann : The Twelve Fantasies for Recorder

Born in Amsterdam in 1957, Peter Holtslag studied recorder at the conservatory of his native city where he was recipient of the Recorder Soloist Diploma with Distinction. At the early age of 26, he was appointed Professor of Early Music and Recorder at the Guildhall School of Music and Drama in London. Since 1988, he has held simular posts at the Royal Academy of Music London and at the Hochschule für Musik und Theater Hamburg. Apart from these regular teaching activities he has given numerous masterclasses in Holland, England, Germany, France, the Czech Republic, Portugal, Belgium, Hong Kong and the USA. As a soloist and with the recorder trio
La Fontegara Amsterdam, his repertoire ranges from 14th century music to avant-garde pieces (many of which have been written especially for either himself or La Fontegara Amsterdam). Referring to his recording of the major Vivaldi recorder concertos (on Hyperion, 1988) he was singled out by 'Gramophone' as "a new recorder virtuoso with more imagination than some". A second solo album, with concertos by Telemann (Hyperion, 1991) classified him as "an accomplished soloist with acute sensibilities" ('Gramophone').