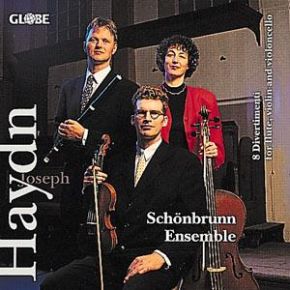 Marten Root studied the flute with Frans Vester and subsequently traverso with Barthold Kuijken at the Royal Conservatory in The Hague. He later developed a special interest in 19th-century flutes and made studies into the use of these instruments and their repertoire, partly for the ensembles he is now a member of: the Schönbrunn Ensemble and the Biedermeier Kwintet. He is first flautist in the Ensemble Anima Eterna under Jos van Immerseel, the Baroque Orchestra of the Netherlands Bach Society and the Orchestre Revolutionnaire et Romantique conducted by John Eliot Gardiner. In recent years he has regularly played in concerts and recordings with, for instance, Tafelmusik (Toronto) and the Hannover Band (London). Marten Root teaches at the Utrecht Conservatory, the Sweelinck Conservatory in Amsterdam and the Hochschule in Bremen.

Johannes Leertouwer studied at the Sweelinck Conservatory in Amsterdam and was a laureate at the Oscar Backcompetition in 1983. It was this prize that enabled him to continue his studies with Josef Suk in Vienna and Prague. He played in the Royal Concertgebouw Orchestra and was for some time a member of the Amsterdam Baroque Orchestra under Ton Koopman. Nowadays he applies himself mainly to chamber music, often on historical instruments. Johannes Leertouwer teaches the violin at the Sweelinck Conservatory in Amsterdam, he is a member of the Ensemble Il Seminario, founder of the Baroque orchestra La Borea, leader of Anima Eterna and of the Baroque Orchestra of the Netherlands Bach Society.

Viola de Hoog studied the cello with Anner Bijlsma and Lidewij Scheifes at the Sweelinck Conservatory in Amsterdam and has specialised in chamber music, on the modern cello as well as on its baroque predecessor. She is the cellist of the renowned Schönberg Quartet, she is a member of the ASKO Ensemble and the Schönbrunn Ensemble and she is first cellist of Anima Eterna. She reached the finals in the international Baroque cello competition in Paris in 1986. Viola de Hoog is a baroque cello teacher at the Utrecht Conservatory.