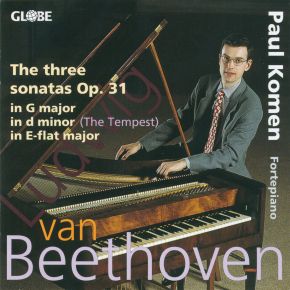 Beethoven : The Piano Sonatas Vol 3: The Sonatas for Pianoforte Opus 31

This is the third volume of a succesful series of piano sonatas by Beethoven, performed by Paul Komen on authentic instruments. Prior volumes contained his last three sonatas and sonatas no. 21-23, from Beethoven's middle period. Fanfare described the series as follows: “Komen's remarkable pianism and musicianship combine to provide one of the finest accounts in the catalog ... these first-rate performances belong in the collection of anyone who cares about this music.”