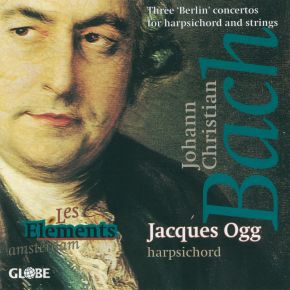 An exciting new recording with Les Elements Amsterdam after their highly successful Telemann record, this time with that brilliant harpsichordist Jacques Ogg as soloist in three relatively unknown, but highly recommendable concertos by Johann Christian ("the London") Bach, youngest son of the great Johann Sebastian, written in 1754 when Johann Christian was living in Berlin with his brother Emanuel.

Johann Christian wrote these concertos primarily for his own use and they established his name and reputation as one of the finest performers and composers ofhis time.They were never published and hardly ever recorded, so this CD deserves it to be called "unique", as are the performances!