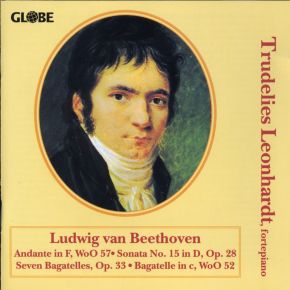 A lovely collection of piano works by Beethoven from the composer's middle period. The Andante in F major was originally meant as the slow movement for the famous Waldstein Sonata, but in the end Beethoven found it too long and had it published separately (it is also known as Beethoven's Andante Favori). The Sonata Op. 28 is the most idyllic of all of Beethoven's piano sonatas. The delightful miniatures that appeared under the title Bagatelles are for the most part elaborations of musical material that Beethoven had sketched out in an earlier period.

Trudelies Leonhardt plays them here on an original Viennese piano from the period and once again shows herself the most sincere of performers, bringing these wonderful pieces to life as only a true musician of her stature can.