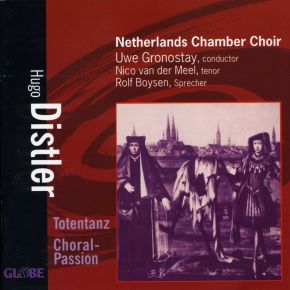 Two 20th century master works by one of Germany's greatest composers, who suffered terribly from the Nazi regime which made him take his own life in 1942. His Choral Passion is a contemporary equivalent of the great oratorio by Schertz (Distler's foremost example) and the Totentanz (Dance of the Death) goes back to medieval sources, as it is based on the now lost paintings from 1463 of the Marienkirche in the German city of Lubeck, where the composer spent the greater part of his life.

The Netherlands Chamber Choir once again sing at top level. The soloists in the Choral Passion are absolutely unequalled, especially tenor Nico van der Meel, one of the most celebrated Evangelist in Bach's Passions of the 20th century. A group of well-known German actors, headed by the great Rolf Boysen, recite the verses in Totentanz.