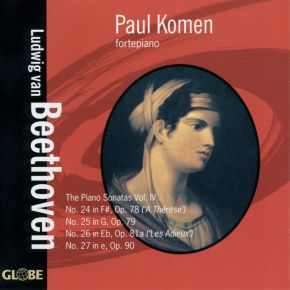 Volume 4 of the complete recording of the Beethoven piano sonatas, performed on authentic instruments by Paul Komen. The first three volumes have all been received with great critical acclaim. On this album one can hear Beethoven in some of his 'sunniest' works, compositions which signify the end of his so-called middle period - at the same time these works are already looking forward to the great series of sonatas that he was to write in his last and most powerful, creative period. Also, due to the choice for the authentic piano from the period in which the works were written, the performances by Paul Komen on this album show these works in a new light, bringing the original sound world of the composer to life.