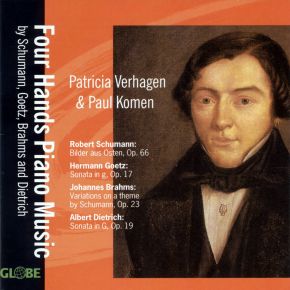 Four brilliant works for piano four hands, including two which are very rarely heard and unjustly neglected: the sonatas by Hermann Goetz and Albert Dietrich. Schumann as well as Brahms only left a limited number of works for the form although they both loved four-handed piano playing. However, in the works recorded here they show themselves as great masters of the genre. Albert Dietrich was a great friend and protege of Schumann as well as Brahms, greatly valued as a composer during his lifetime, but nowadays unjustly forgotten. The body of work he left is not very large, but extremely varied because in most cases he only wrote one or two works for the usual musical genres of his time. Hermann Goetz is chiefly known through his opera Der widerspenstigen Zahmung (The Taming of the Shrew), still regarded as one of the best 19th century German comic operas. He also wrote a number of exceptional chamber music works, of which the lyrical Sonata in G minor for piano four hands impresses through its finely-treated polyphonic textures.