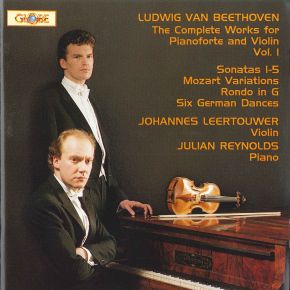 The Complete Works for Pianoforte and Violin Vol 1

This is the first volume of the first ever absolutely complete recording of all of Beethoven's works for pianoforte and violin - not only because all the original repeats were made, but also because the three early, and extremely good works for pianoforte and violin are included, which Beethoven wrote before he embarked on his venture to explore to the fullest the combination of piano and violin. In our striving after a textually faithful performance of these works, we have come to the conclusion that a 19th century piano with a proper Viennese action would be the most suitable instrument, also because its dynamic possibilities fit so well those of the violin. The piano we eventually found was built by Peter Rosenberger in Vienna, 1845, with the original leather hammer heads, a great clarity, a beautiful 'cello- like' bass and a clear voice-leading in the chords which is very important for bringing out all of Beethoven's original musical thoughts and ideas. The piano was completely restored and restrung by Frits Janmaat with as a result an incomparable instrument with all the expressiveness it possessed when it first left Rosenberger's Viennese workshop in 1845! Johannes Leertouwer plays an outstandingly beautiful violin, also in mint condition, built by Jacob Stainer in 1663.
These performances will be a revelation even to people who think that they know these works inside-out, not only because of the historical and musicological aspects, but even more so because of the intensity of the performances • this is the way Beethoven should be played!