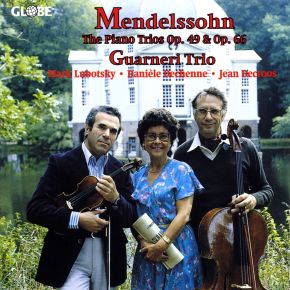 The Guarneri Trio was founded in 1961 by Jean Decroos and his wife Daniele Dechenne, together with Herman Krebbers as violinist. After the latter had been forced to abandon his active concert career due to an unfortunate accident in 1979, his place in the Trio was taken by Mark Lubotsky. In this new formation, the Guarneri Trio could not only maintain its great international reputation, but even enhance it.

Daniele Dechenne was born in Paris and began her piano studies at a very early age. She finished of fthese studies at the Paris Conservatory with a Premier Prix, after which she won first prizes at various important piano competitions, Bolzano, Vercelli and Geneva among them. She settled in Holland in 1956 and gained great fame as a soloist and chamber music performer with appearances all over Europe and the Far East and also through a number of recordings.

Mark Lubotsky was born in Leningrad and went to the Moscow Conservatory when he was seven years old. His teachers there were Abraham Yampolsky and David Oistrach, and even before finishing his studies, he won first prize at the World Youth Festival in Berlin. In 1956 he won the Salzburg Mozart Competition, and in 1958 he was awarded first prize at the Tchaikovsky Competition in Moscow. He performed and recorded with all the main Russian orchestras, and appeared as a soloist with all the important European orchestras. He introduced Benjamin Britten's Violin Concerto in Moscow and recorded this work in 1972 with the English Chamber Orchestra and the composer himself as conductor. Mark Lubotsky settled in Holland in 1976 and quickly grew to belong to the very select group of international leading violinists whose interpretations are considered to be authorative. Jean Decroos was born in Calais and went to the Paris Conservatory when he was just twelve years old, to study with Paul Tortelier and Andre Navarra, He started his career as first cello in various orchestras and settled in Holland in 1956. Five years later he won first prize at the Casals-Kreisler Competition in Liege, and shortly afterwards also at the Concours International Pablo Casals in Tel Aviv. Meanwhile, he and his wife Daniele Dechenne had also won first prize at the Concours International de Geneve. Jean Decroos has been solo cellist with the Royal Concertgebouw Orchestra of Amsterdam for many years now and appears regularly with the great international symphony orchestras. He plays an outstandingly beautiful cello by Giovanni Baptista Rogeri, Brescia, 1696.