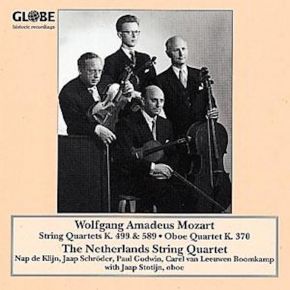 The second album in a series of three featuring the famous Dutch violinist Nap de Klijn who died in 1979 but who is still fondly remembered by a great many music lovers. He was the founder and great inspiration of the Netherlands String Quartet, who played all over the world to great acclaim during the 60s and 70s. Two of Mozart's greatest string quartets can be heard here to which we added the wonderful Oboe Quartet, featuring Jaap Stotijn as the inspired soloist. The original (mono) recordings were made in 1954 and 1956, and although the recording quality may not be of the same quality it is in the digital era of today, once again these performances stand out as shining examples of great quartet playing.