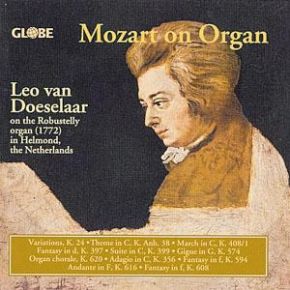 Re-issue in Globe's 6000 series of GLO 5063 from 1991. The original issue has been out of stock for quite some time. but orders for it kept coming in, so it is back! This is also a new digital transfer of the original digital master, with some enhancement to the already glorious sound. Although Mozart never wrote a single piece for organ solo (amazingly, because he considered the organ the greatest o finstruments and played it when and where he could), a great many of his keyboard works are eminently suited for performance on organ, as are of course the famous pieces he wrote for mechanical clocks and such.The Robustelly organ in Helmond from 1772 is probably the most suitable instrument that can be found in Europe for these works.