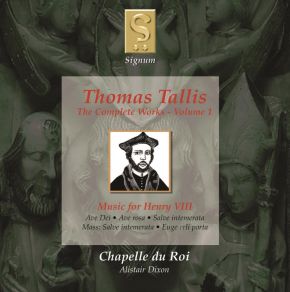 This album is the first in a series of nine covering the complete works of Thomas Tallis (c.1505-1585). Not for nothing is Tallis known as the "father of church music" – with his colleagues at the Chapel Royal he created most of the church music genres that we take for granted today.

Volume one in the series of nine contains much of the music that Tallis wrote during the reign of Henry VIII. The two early votive antiphons Ave Dei and Ave Rosa open the album and it concludes with one of Tallis's masterpieces Salve Intemerata.

Unusually for an English composer of the time, Tallis wrote a "parody" mass based on material from Salve Intemerata. Also included are two beautiful miniatures not previously recorded – Alleluia: Ora pro nobis and Euge celi porta. This was the first disc to be recorded by Chapelle du Roi and was Signum Records' debut disc in February 1997.